TLC’s Behind Closed Doors: The American Family: A Review of Episode One

TLC Go lets us watch Behind Closed Doors: The American Family before it appears on television. I watched episode one and enjoyed it. The premise is that families are filmed 24 hours a day by wall mounted cameras, rather than an in-home camera crew.

Mandy and Jeff host a podcast about marriage, but their own marriage is struggling. After adopting a child, the parents of four decided Mandy would be a stay at home mom. That's been tougher than she imagined, causing her to struggle. Mandy's too tired for sex, causing Jeff to be quite unhappy. This show seems like a way for the pair to get more views for their webcast, which I'm sure it will.

Andy cheated on wife Deena, and the pair hasn't recovered from the infidelity. This incident caused Deena to shut down, creating a rift between her and her kids, as well as leaving her marriage in shambles.

Tam and Paul have a tumultuous relationship. They are both stubborn and refuse to give in to the other. Tam got super insecure when Paul was texting with an ex, due in part to her childhood insecurities - she was born with a penis, but as she matured, she grew breasts and became more female, I believe called XXY syndrome.

Is this show worth watching? Yeah, it's an interesting take on reality TV. I think it's got novelty value, because with cameras on 24/7 and without a camera person around, it's easier for the couples to show who they really are, and for TLC to get enough crazy footage to keep us tuned in.

Email ThisBlogThis!Share to TwitterShare to FacebookShare to Pinterest
Labels: behind closed doors

90 Day Fiance's reunion last week was explosive, and week two is only getting better. Or worse. Same thing, in this case.

First, Paola and Russ fought because she wanted Russ to have her back, but he can't get over the whole lingerie issue. With all due respect, Russ, please get over it. You married a woman who is very in touch with her desire to model and her sexuality; what did you expect? Later, Russ defended Pao because he's smart and figured out what he needs to do.

Danielle addressed that she has a new boyfriend, but doesn't want to talk about him because he doesn't want to be in the spotlight. To me, it sounds like he either wants his privacy (normal) or doesn't want anyone to know he's dating her. Mohamed claimed that Danielle never loved him, which sounds like he's trying to convince himself. Danielle cried and ran offstage, and Mohamed said that's how she reacts every time something doesn't go her way. He then claimed Danielle isn't independent, and that she's faking her reactions for sympathy.

Okay, let's be real - Danielle loved Mohamed, at least to the capacity that she can. Mohamed played the victim here - he said he tried to make it work, but Danielle gave him no reason. He claims that he tried to pick up the pieces but things were too broken. The host asked Danielle if she thinks she can get too attached, and she said yes, which is obvious. She has the book of social media conversations that she plans to send to immigration, after all.

Mohamed said he plans to disappear after this reunion to fix his life. Danielle said that makes her angry because he's not taking responsibility for himself. He wants to be rid of her, she still wants an apology, and although she's not saying it, she wants him back.

Loren was on an angry rampage. She asked Jorge what Anfisa loved about him, aside from his money. She said she can't see more to Anfisa than a bunch of Botox. Loren was also mad at Danielle and Mohamed because both couples make the process look like a joke. She was upset that she and Alexei got denied twice, but these two couples were approved easily. Paola joined in to support Loren, as they are friends, and have probably discussed Mohamed and Anfisa's relationships with their spouses at length.

It was noted that Anfisa never cared for Jorge's family, yet she got upset when Jorge didn't defend her, even though she didn't respect him. Jorge was asked why it took almost a year for him to see his family. He said it's because of Anfisa's insecurity. She claimed that he was talking behind her back, but really, he's allowed to have his own conversations! Should he talk badly about her? Well, she wasn't giving her any reason not to! Jorge was asked if he could have done better at introducing Anfisa, and he said yes, but Anfisa never showed interest. What it seems to be is that Anfisa didn't feel welcome, so she felt like Jorge's family was against her. That actually makes sense - I'll give Anfisa some credit here. Plus, when Jorge's sister talked badly about Anfisa to her face, Jorge did not defend her. He says it was because he didn't want to disrespect his sister. And really, her comments weren't the nicest, so Jorge could have at least said they were inappopriate.

Chantel was asked why her family thought that chicken feet were a voodoo tradition when Pedro's family made them. Chantel said that nobody in the family ate the chicken feet, although Pedro did eat some and didn't see a problem with them. Then, we found out that Pedro's mom is a lawyer. A lawyer! A lawyer!!! So why is Pedro sending her money if she has the ability to make a good income?

We flipped to a scene where Anfisa said he was her first. Loren and Paola laughed because they didn't believe it. Jorge said, "I guess I believed her". Jorge said he didn't even know Anfisa was dating guys before she came to America.

The money discussion came up, and Jorge said he never claimed to be a millionaire, but he did flash money in her face and she responded. Jorge said he felt like he was treated like a dog when he couldn't keep up with Anfisa's financial needs. Jorge was asked why he didn't disappear once Anfisa said she's all about the money. She defended himself saying that all women want nice things. Jorge said he was going through a lot when he met Anfisa, and he just wanted someone to love. Jorge wants people to understand what he went through; he gave Anfisa trust and she backstabbed him. But what actually happened? THE SHOW ENDED!!! We won't find out until next week!!! NOOO!!!

Note: Paola mentioned a gold digger academy in Russia, and asked if Anfisa went. While the group laughed at this, this article does show that it is real.
at September 03, 2017 No comments:

Off Topic: Why I'm Moving Away From Fast Fashion, And Where I Shop Now

When I was in college and afterwards, I loved shopping at Old Navy and similar places because I could run in and walk out with some affordable, cute clothes. I would never say I was particularly trendy, but I do have a distinct style, and H&M, Forever 21 and other stores could cater to that. Now that I've gotten older (not to say I'm a dinosaur or anything, thank you very much), my focus is on longer lasting, high quality clothing...and bonus points if it's good for the world.

Seriously, though, fast fashion can create a lot of clothing waste because the products aren't necessarily high quality, causing lots of textiles to go to waste. I'd rather buy something that will last and I can truly enjoy over the long term, rather than something that will go out of style or bore me in a month or two. Below are three brands that I'm really into right now.

My latest find is Pact Organic, which creates amazing basics that are reasonably priced. Plus, my discount code will give you 20% off. The clothes are fair trade certified, and have no toxic dyes or pesticides. This is a great place for leggings, t-shirts, underwear and socks. Everything so soft and lovely to wear. This site features clothes for men, women and kids.

Bonus points for amazing customer service. I received the wrong leggings, and a five minute call to customer service had a correct pair on its way to me. No hassle on my part whatsoever, which I truly appreciated. Plus, the person I spoke to was very cool and understanding.

I got a 50% off discount code from Facebook, so I bought a bunch of stuff, and I'm definitely going to return for more. 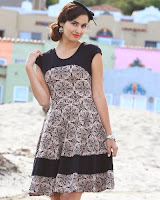 This brand does cost a fair amount, but the fabrics are amazing and high quality. The patterns are fun and creative, and the clothes are flattering. Everything I tried on fit me perfectly. And bonus points for modesty - I like a dress that shows off my curves, but not one that makes me worry about if my butt is going to make a public appearance. I like the retro-yet-modern vibe of the clothes. If you're looking to make an understated statement (if there is such a thing) this brand is perfect for you.

I've included a photo from the company's website of the Napoli dress, one of my favorites. This dress, aside from being beautiful and available in a variety of patterns, is machine washable. This is amazing for people like me, who are way too lazy to go to the dry cleaner. It also has pockets, which is a big seller for people. For me, I like that the pockets don't add bulk around the hips, which is often a problem.

A key benefit of this brand is their size range - they don't limit fashion to those who are a size two. These clothes are made for - and look great on - a range of sizes.

This bra and underwear company's goal is to give women undergarments that fit properly. Before you choose a bra, you go through a series of questions designed to find a bra that fits you just right. You tell the site what you're wearing now, what your issues are, and some info about your shape, and it pops out your anticipated size. Not convinced? You can try on a bra before you buy it. How cool is that? It's a great way to get your fit right without going to a retail store.

While the prices of ThirdLove's products aren't low, they're reasonable. And when you buy more bras, the prices get lower. Plus, the quality is great - my friend described wearing a ThirdLove bra like not wearing a bra at all.

Want to buy one? This referral should give you $15 off your first purchase.