Shealyn Brand took a chance when she auditioned for a spot on the first season of VH1's Dating Naked. After all, it was the first season, so she didn't know what to expect. Fortunately, her carefree, fun spirit got her through the episode and allowed her to show how awesome she is. Recently, Shealyn took the time to talk to Less Than Reality to share her experience, her thoughts on the episode, and her love of pizza.


You appeared on season one of VH1's Dating Naked. How did you end up on the show? Did you audition? Did you know what the show was, or was it a surprise?


I found the show on a casting website, and being fresh out of a relationship decided, what the hell, I'm gonna audition! The show was new at the time but I figured it had something to do with being naked - which I am totally okay with, for better or for worse.

Of course, you had to be naked on your date - how was that? Did you hang out naked in advance to prepare yourself or anything?
I'm one of those people who gets home and immediately takes off all clothing - which is okay because I either live alone or with a significant other. The thought of it grosses my Ma out though and she tells no one to sit on my couch because my bare ass may or may not have sat on it!
Dating Naked makes it look like everything happens really quickly. How long were you on location to film?

I was on location for a week. The audition/interview process took about a month prior to my trip to Panama (where it was filmed).
We all know that reality TV isn't exactly reality. Did you have to film anything multiple times? Was what was aired relatively true to what happened, or do you feel that a lot was missed?

It's all in the editing. What happened and what ends up in the episode is always up to the editors. I chose to behave well (relative to the others on my episode). I already knew my parents would flip at me even doing the show - I wasn't about to bang or cry on camera - I figured my parents would see it eventually and I'm their little angel.
What was the best part about being on Dating Naked? What was the worst part?


Best part was a free trip to Bocas Del Toro and meeting someone very special in my life (he was part of the crew). Worst part was pissing off my folks, oh, and the fact that they didn't blur my butt! I was told they would blur my butt! Perhaps I would have done some squats had I known, but probably not.
On the show, we could see you had several tattoos. Tell me about them.
Mostly pizza related, which explains why I have joined the Brooklyn Pizza Crew. I have my version of a Mom tattoo and the city emblem of my hometown of El Centro, CA.

Did you get any feedback from friends, family or TV viewers after you appeared on the show? What did they say?


Obviously my parents and family were less than thrilled with my choice to appear on the show. However once they watched it and saw how great I came off, very down-to-earth etc., they learned to deal with it. Now, whenever it's on, my Nana records it or my Ma shows my nieces.
If you could be on the show again, would you do it?
Some days I think yes. Most days I would say no. However it did prove to me that I don't care what anyone thinks about me and I can do anything! 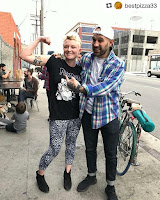