Couples Therapy is back for another night.

When the episode opened, Liz said something telling about herself - she said that nobody should hide the truth in order to spare her feelings. Which is exactly how she treats Jon, but Jon needs more of a loving, nurturing relationship. When Jon talked to Dr. Jenn, she said that Jon's falling into the same pattern as he has with Kate. Yet Jon defended her - he said that he loves Liz. It's almost like he's willing to look past the abuse for the positive aspects of the relationship. Dr. Jenn advised Jon that he should tell Liz when she's insulting him - he needs to stand up for himself and take back his power.

Jon and Liz later spoke, and Liz had a sarcastic response to Jon's question. Then Liz had a revelation - she's too blunt when she talks and she is, in fact, acting like Jon's ex Kate. I'm glad she finally realized it because even though Jon knows he has to stand up for himself, he hasn't yet. 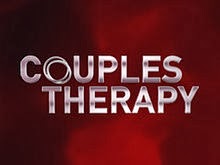 Dr. Jenn announced that the group session would be one of the hardest because they'd be discussing childhood trauma. Taylor was first. She, at the age of two or three, experienced her dad beating her mom in front of her. Her mom grabbed her and they left. Taylor then reflected on her own abusive relationship with Russell and how she should have left sooner so her daughter Kennedy didn't have experiences like her own.

Ghost's dad left when he was 6, so he tried to become a man early. That led him to doing illegal things because he felt lost. He felt lost. Ghost noted that his inability to love properly comes from not experiencing love of his own.

Farrah was third. She said when she was two, she kept trying to get her parents' attention. Her mom said something along 'go inside and sit by yourself', and Farrah never felt like she was getting attention. As Farrah grew, she was forced to stay at someone's house, and that person would hit her. When she told her mom, she didn't care. (The person's name was blanked out.) Dr. Jenn pointed out that Farrah's history is that she felt like nobody has been there for her, and that Farrah chooses men who follow that pattern.

Sada was next. Her parents were always fighting. Her dad had two sides - the great, loving side and the crazy side after something set him off. When that happened, her dad would hit her, even in front of her friends. He would also break furniture. Sada's mom would always pack their bags and they'd drive around, but not leave. At one time, her dad saw them in the car and ripped the locked door off of the car. Whatever happened next must have been bad because Sada didn't remember it. Dr. Jenn told Sada not to let this define her because it affects her relationship. When asked, Whitney stated that abuse should be discussed because it can help people, and she's really proud of Sada.

After group, Kelsey told the confessional that she was surprised by Ghost revealing his true feelings. She seemed to soften towards him after the anger from the situation with Ghost's other girlfriend. Kelsey said she needed to get to a place where she can forgive him - she doesn't want to stay mad.

Dr. Jenn brought in Farrah's mom so they can address their issues. Debra came in and Farrah smiled at her but they didn't hug. Dr. Jenn asked if Farrah's always been as strong as she is now, and Debra said yes, and she comes from a line of strong women. Debra said she was by Farrah's side when she announced her pregnancy. Dr. Jenn then asked Debra what she said to Farrah at the time. She said that Farrah said she wanted an abortion but she was against it and said no. Dr. Jenn noted that Debra and Farrah both do the same thing - when they describe major moments in their lives, they become defensive and don't allow their feelings to be processed. Dr. Jenn asked Debra how she's feeling at the moment. Debra said she feels blessed to be there. Dr. Jenn said she's coming off as angry. Debra denied it. (Side note: did it look to anyone else like Debra's on some major anti-depressants and sedatives? She seems to have some peace pills flowing through her system.) Farrah said that her mom doesn't know how to talk to her and that creates distance. Farrah said the anger in the family makes it hard for people to get along. Her mom kept spewing the BS about how she isn't angry.

For once, I actually felt bad for Farrah. She and her mom are so similar, yet Debra, as the authority figure, had the responsibility to understand and listen to Farrah. And she doesn't. And probably never has. She seems to live in some kind of cloud (not unlike Farrah) where bad things don't exist and everything's okay because she's not tuning into her emotions.

Debra did eventually break down and cry...she talked about how hurt she is. What is comes down to is that Debra wants people to share their feelings, and she feels like she can't help because she can't understand people. Dr. Jenn told Farrah to start mourning the mother that she wants because Debra can never be that mother. Ouch. Valid, but ouch.

Dr. Jenn pulled Sada aside to talk about her father's rage. Sada said she felt guilty for talking about her father's actions. Dr. Jenn asked if Sada thinks her dad feels guilty for what he did. Dr. Jenn suggested that she talk through this with her dad. She asked if Sada had thought about her dad coming out to the show so they could talk, and suggested that she do that. Sada called her dad and asked. He agreed to appear on the show. Her father's impending arrival clearly made Sada nervous. Whitney tried to talk her through it but Sada wasn't responsive. It turns out that Sada felt sad because Whitney wasn't trying harder to connect with her. It was interesting - this couple has such strong communication issues. They're both trying to connect with each other but are missing the mark.

The pair tried to discuss their communication gap. Sada was telling Whitney to go when she really meant stay. Whitney said she can't read between the lines - she needs Sada to say what she wants. This led to a major argument. I hate to say it, but they kept talking in circles. Sada doesn't state her needs, Whitney doesn't listen, blah, blah, blah. When Whitney's voice got loud, Sada shut down, which is probably a carryover from her childhood trauma.

Next episode, Sada's dad will arrive. Farrah will meet with an ex. The group will deal with anger management. And we will see what will probably be a very intense episode.
at February 20, 2014