If you haven't seen Miley Cyrus' twerky performance at the VMAs, do yourself a favor and don't. I gave in after everyone posted on Facebook about it, and I can't unsee what I saw.

I get that Miley Cyrus is trying to prove she's an adult after her Hannah Montana past and rocky engagement, but twerking on Robin Thicke on the VMAs was probably not the way to do it if she wanted to come out in a positive light. First and foremost, her singing wasn't great, and secondly, her performance was just...appalling. Sure, MTV is aimed at teenagers and those who are older than teenagers, but I would bet at least a few younger siblings watched Miley's performance and equated it to the Hannah Montana they once loved, and parents can't be happy about that one. In fact, I read that Miley's dad Billy Ray Cyrus is involved with the PTC and is appalled by her daughters performance.

In any case, celebrities and non-celebrities have shared their opinions on Miley's performance, and here's what I'm reading:

Robin Thicke's wife, Paula Patton, was reportedly okay with the overtly sexual performance. It was originally reported that she freaked out, but later reports said that she's okay with it. I believe she probably did freak out but covered it up...and if she didn't freak, it's because she knows Robin's got no interest in Miley and this will likely raise Robin's star and income...which helps her out, too. It was also claimed that Paula saw rehearsals and was okay with the outcome because of that, but another report says that the rehearsals were way tamer than the real performance, which has Miley's team freaking out. This is referenced at UsMagazine.com:

"Miley's team is freaking about that performance," the first insider admits. "They saw the rehearsals, but those were really played down compared to the live performance."


Us Magazine also told us how Robin feels about the performance, and I don't blame him. Blurred Lines was his first big hit, and Miley stole his moment in the sun:

"Robin thought it would be fun to include Miley, but he didn't realize how much she would overshadow him. This was his big night and big performance," one source tells Us of Thicke, who broke out in a big way this year with "Blurred Lines." Continued the source: "I don't think he would have done it knowing what it ended up like."

James Van Der Beek shared: Things I learned watching the #VMAs2013: There's nothing you can do with a foam finger that you can't air on MTV.

Gloria Loring, Robin Thicke's mom, is less than thrilled about Miley's performance and what she saw Miley do with her son. Per The Huffington Post:

"I just keep thinking of her mother and father watching this. Oh, Lord, have mercy. … I was not expecting her to be putting her butt that close to my son. The problem is now I can never 'unsee' it," she said. "Him? Loved it. I love that suit, the black and white suit. I don't understand what Miley Cyrus is trying to do. I just don't understand. I think she's misbegotten in this attempt of hers. And I think it was not beneficial."


Lisa Belkin of The Huffington Post hopes that Miley learned a lesson from her performance, and I hope so too.

I think the best reaction of all is from Will Smith and his family...their faces say it all. This image, from BusinessInsider.com, shows the group simply gaping at Miley as she twerks as millions of people watched. This pretty much says it all. 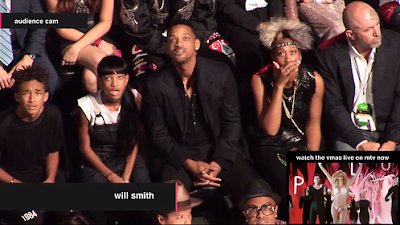