Kylie and Kendall Jenner Don't Want To Be Kardashians

In a statement that's been taken way out of context by a lot of people, Kylie and Kendall Jenner are happy being themselves. What do I mean, you ask? Well, in Glamour magazine, Kendall declared that she and Kylie are "full-throttle Jenners". And people everywhere took that to mean that they're Kardashian haters.

Here's the quote from Glamour magazine:

Kendall: "We're full-throttle Jenners!"
Kylie: "All that matters is that we're a family." 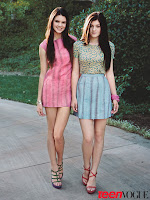 All of a sudden, the internet was aglow with people saying that Kendall and Kylie hate the Kardashian heritage and want nothing to do with the famous last name. But the thing is, I don't read it that way.

I think the girls are simply saying that they're happy with who they are. Sure, the Kardashian name has brought them fame and fortune. But they're simply not Kardashians. They're probably close with their dad and understand that they can reap the benefits of their momager Kris without losing who they really are.

That aside, the girls don't seem to be quite as immersed in the fame pool as their Kardashian counterparts, especially Kim. They don't seem to be chasing the spotlight in the same way that Kim did, and along with her, her sisters.

Let's give these girls some credit. They're not hating on their half-sisters, they're just enjoying the life - and parents - that they've got. They seem to have good heads on their shoulders and haven't managed to scandalize themselves quite yet, so maybe that's what separates them from the full-throttle Kardashians and makes them proud to be who they are.