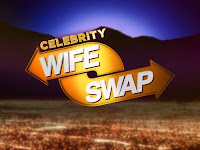 Kate Gosselin opened the episode, and oddly, with her long blond hair, she looked a lot like Kendra Wilkinson. She told us about her accomplishments, then about how she's involved in her kids' lives and is very strict. Daughter Mady commented that her life, at age 12, is all about work. While Kate says that she doesn't have a full time babysitter, she does have a friend named Deanna who often looks after the kids. Deanna would stay throughout Kendra's stay in Kate's house.

Kendra was next and she came off a lot less pretentious than Kate did. Kendra and husband Hank Baskett were so much fun in their intro. They explained how they are easygoing and how Hank does so much for Kendra. They have a nanny, Rosa, and Kendra is happy with that - she doesn't want to give up her whole life to be a mom.

The Swap: Living By The House's Rules

In part one of the swap, the wives had to live by their host family's rules. Kendra met the Gosselin kids first. The kids were standoffish, and Kendra was clearly nervous.

To start, the Gosselin kids gave Kendra a lesson in everything that she has to do to fill Kate's shoes, and Kate struggled to relax as Hank cooked. As the night went on, Kate got more and more relaxed - she seemed to love the time off. She even stayed up past her bedtime to go to a club with Kendra's friends.

Kendra, on the other hand, struggled to get the kids up and running. She made them bowls of cereal, but they told her that they prefer eggs. She asked them to hang in there. Kendra was so impressed by how structured the kids were - she said she'd never seen children with that much structure.

Kate got introduced to a nice dinner and wine while Kendra got introduced to the kids' chore chart. After dinner, the kids have a lot of responsibilities, and that seemed to hit Kendra hard. She believes a kid should be a kid, and the chores certainly don't go along with that.

Part 2: Changing Up The Rules

Kendra went first, and she switched the chores that were assigned to the boys and girls. So this week, the boys would care for the chickens and the boys would handle lunch. They'd enjoy a picnic dinner of tacos, and chores after dinner were eliminated.

For her part, Kate immediately took some of the responsibility away from Hank. She also got rid of the nanny for  a week. Kate said she'd be doing the cooking and parenting with Hank. She pulled Hank out of school for the day for a family day. She also scheduled every minute of the day.

Kendra bonded with the girls and was happy, but became overwhelmed during taco night. The kids were fighting and eventually Kendra seemed to give up. She made up for it with ice cream, though, and from that realized that she should spend more time with her son. Kendra took what she learned from working with eight kids and realized she could apply her learnings to her one child.

Meanwhile, Kate taught little Hank how to clean up his toys and made him eat dinner at the table with her and Hank. She had strong feelings about Hank's lack of eating abilities and let Hank know that, which he didn't seem to enjoy. Kate later scheduled a family yoga session and encouraged Hank to keep the tradition going. He didn't seem receptive, but that may be due in part to Kate's way of saying things in a motherly, not a friendly, to him.

Kate asked Hank what would happen if he stopped handling so much. He said Kendra would fill in. Kate asked Hank if he was sure about that in a very leading manner. Ouch, Kate!

Deanna and Kate sat down with Hank and Kendra to discuss the week. Kendra spoke first and said she was overwhelmed by Kate's rules and structure. Although Kendra seemed to have good intentions, Kate took that as an attack and pretty much told Kendra off. She insulted her parenting, and if her words were daggers, Kendra would have been seriously injured. Things calmed down, and Kendra explained how great it was when she allowed the kids to have fun. She also stated that Kate empowered her and she's ready to spend more time with Hank. I'm not entirely sure Kate took anything away from the swap - I'd be surprised if rules were loosened up even a tiny bit in her home in the long term.

We were given the updates after the show, and were told that Kate's allowing basement picnics and taking time for herself. Kendra's trying to contribute more time to her family. Will the changes stick? I guess we'll never know.
at February 26, 2013