I caught the first episode of VH1's Couples Therapy tonight and I think I need to go to therapy after watching this show. 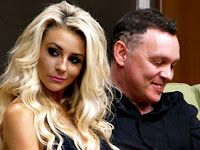 We'll begin with couple Doug Hutchison and (at the time of filming) 17 year old Courtney Stodden. Courtney's since turned 18...which is somewhat of a relief considering that we've already seen way more than we ever need to see of a 17 year old's body. Anyway, Courtney began by putting on this big show about how she and Doug love each other soooo much, and Doug defended their relationship by saying that the pair were married under the eyes of God. Okay, creepy enough, but it got even creepier when asked if he had a daughter, Doug said, "I'm raising my wife." Ummmmm....yuck. Just...yuck.

Shayne Lamas and Nik Richie, who married just 8 hours after meeting for the first time, were the second most interesting couple on the premiere episode. Despite their blink-and-you'll miss it courtship, the pair did well together until stress took over. Shayne's stress was evident on this episode because when Courtney asked how she was doing, Shayne lashed out, stating that she was uncomfortable when people put on shows...a direct dig at Courtney. While I don't disagree that Courtney was being incredibly fake, I think the fact that both bottle blondes with brown eyebrows are competing for the "hot girl" spot on the show, and it seemed like Shayne thought Courtney was winning.

Alex McCord and Simon Van Kempen, who caused a ton of drama on The Real Housewives of New York City, seemed relatively chill compared to their competitors. Of course, this isn't a challenge when you're up against a 17 year old who sings really awful music (Courtney), a former reality star (Shayne) and a guy who runs a website meant to embarrass people (Nik). Alex actually took the role of peacekeeper in the Shayne/Nik vs. Courtney/Doug insta-feud.

I hate to say it, but couples Too $hort and Monica Payne and JoJo and Tashaunda Hailey didn't get the attention they probably wanted by being on the show because they were completely overshadowed by the blond drama. But that's not to say that things won't change as the season progresses - it looks like Jojo and Tashaunda, at the very least, will cause some drama as the season progresses.
at October 06, 2012