This week on Dance Moms, we were treated to another week of Candy Apple's v. Abby Lee Dance Company drama.

Abby opened the episode by telling the girls that they'd be staying in California and going to the Energy Dance National Invitational competition in Beverly Hills. This was a competition in which teams must be invited to participate. 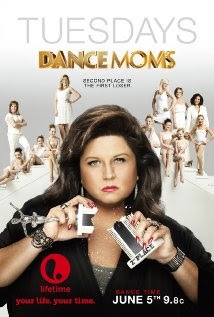 Abby continued by announcing the girls in the pyramid. Paige, Nia, Chloe and Kendall made up the bottom row. Brooke and Mackenzie took the middle row because of their perceived laziness and mistakes, respectively. Maddie took the top row.

Abby said the group dance would be disturbing, and then she announced the title - The Last Text. The dance would portray the girls having fun in the car until they have a car crash. Paige was used as the driver as a prop to look beautiful, and Maddie's acting was given the credit to make the girls win. After their first rehearsal, the girls ran up to their moms to talk about how disturbing the dance is. Christi, in her opinionated nature, thought the dance was ridiculous. Kelly was upset because Paige wasn't doing more dancing in the national competition.

Mackenzie (who'd use the Honeybee song that Vivi-anne Stein didn't do well early in the series), Maddie (who got a lyrical number) and Brooke (who was doing the Diary of Anne Frank Dance) were given solos. Nia, Kendall and Chloe were told that they'd be learning the same dance, and the best of the trio would be given a solo in the competition. Jill, of course, took issue with this because her daughter Kendall is clearly the best, in her completely unbiased opinion. (Insert sarcasm here.)

In an effort to earn Chloe the solo, Christi kept her in the studio to coach her. She got pretty harsh with Chloe. Chloe got frustrated, which got Christi frustrated, and that created a losing cycle for the pair. Jill and Kendall also practiced, but Jill took a more supportive approach. Unfortunately, Jill's intentions were selfish - she clearly wanted for Kendall to get the solo because Jill wanted the victory for herself, not necessarily for her daughter.

ALDC staffer Gianna brought her phone into the room with the moms and presented them with a tweet from Cathy Nesbitt-Stein. It said that the Candy Apple's Dance Team would be kicking Abby's team's ass. Very mature, Cathy, Very mature.

Kelly confronted Abby about Paige not having dancing of her own in the group number, and Abby went a little too far - she said Paige needs to go to a pediatrician because she's stupid. Kelly went back in the moms' room and cried. She told the women that she thought it might be time to leave. Holly told Kelly to lean on the other moms if she needs to, but she recognized that the situation with her daughter and Abby was tough to bear.

Fortunately, Kelly got some more uplifting news than she was getting from Abby. An agency found Paige's picture and wanted her to do a photo shoot. Paige agreed to participate, so Kelly took her to participate in the opportunity. Paige was dressed up like a Hollywood diva from the 40s. She looked great. It seemed like she had a lot of fun, which she deserved after dealing with all of the negativity from Abby.

The next day, Kelly and her kids chose to return, and the ever-positive Abby questioned Kelly about why she even bothered to return. Such a nice woman, that Abby!

The three potential soloists, Nia, Kendall and Chloe, all performed the songs. Each of their moms were asked to judge who should win. Of course, the moms chose their own children, which was clearly Abby's plan all along. So Abby told Melissa to choose a winner. Melissa chose Nia because she gives herself 100% to her opportunities. The moms clapped, and I agreed 100% with Melissa's choice. Jill had a hissy fit because Kendall didn't get the solo. Abby asked Melissa who she thought would score the highest, and she said Chloe. In the end, Chloe was given the solo due to Melissa's assessment. It seems that Abby knew the answer she wanted all along, even though she got to it in such a roundabout way. Chloe said that she wanted to work hard so she could make Kendall and Nia proud because they didn't get the opportunity to perform. However, she ended up getting overwhelmed and walking out of rehearsal. Christi sat with Chloe to boost her confidence, although Abby contends that Christi gets Chloe riled up before her performances.

When the Candy Apple's team arrived at the competition, they peeked into Abby's rehearsal room and made fun of the ALDC's props. As they planned, they intimidated Abby's team. Abby, in turn, told Maddie that she intimidates Justice from Candy Apple's, and she needs to keep that up. Cathy showed some more classless behavior by saying rude things, then she barged into Abby's studio. She said that the moms from her team want to talk to Abby to prove that they hadn't been calling and harassing her. Christi started to speak up, and Cathy told Abby to put a muzzle on her.

Later, Abby went into Cathy's room to confront Justice's mom about calling her. Justice's mom denied it, although Abby insisted that she had proof that Justice's mom had called Melissa looking for information. In her speech, Tanya, Justice's mom, said she and Justice both respect Abby and her team, which was a telltale sign that she was lying and had called Abby. However, it seemed that it was for a positive reason, for Abby at least - Tanya wanted Justice to jump ship to Abby's team. Cathy went off on Tanya, and it didn't sound good.

Cathy went into the competition believing that she and her team could beat Abby's team. She and her team chanted to try to prove their dominance. While that was playing dirty, Abby played dirty right back by sending Maddie and Chloe backstage to psych out Justice.

Maddie performed her lyrical solo first. It was beautiful and well performed, as we've grown to expect from Maddie. She was so good that even Abby was pleased.

Justice was next. His jazz solo was...interesting. It was dramatic, to say the least. He was dressed up like he was bloody and torn up from a battle. Abby said she saw tons of flaws in the choreography, although Cathy thought he did great. I, personally, wasn't impressed with Justice's choreography - it didn't do his talent justice.

Brooke was third.  She performed wonderfully. Her movements were on point and she displayed a lot of emotion.

Mackenzie was next. She was cute but at this point, I think Mackenzie's better than this song. It was clearly done as revenge against Cathy, however, Mackenzie can be such a mature dancer, and this song is so childish.

Chloe's performed her contemporary solo next. Her execution was amazing. The song and dance were perfect for her. This isn't a surprise, of course, being that Abby clearly designed the solo for her. Even Holly was happy that Chloe got the solo, and that says a lot because Chloe beat Nia out for the opportunity. Christi cried after Chloe's performance, which was so sweet.

The Storm, Candy Apple's jazz group number, was next to be performed. I seriously had a "WTF" moment watching this. It was so weird. The music was weird in a bad way and the choreography was hardly amazing or original.

Kelly brought in Paige's pictures from the photo shoot, and instead of being happy for her, Abby said that Paige has too much going on. She also said that beauty fades, and directed that comment at Kelly. Ouch, that was dirty, Abby.

Abby's girls performed last. Christi feared that the topic of this dance may be too gory for a national title. I can see why - the dance definitely was dramatic. I think the best part was Christi's face as she watched the number - it was a mix of horrified and intrigued. I was definitely not feeling this number. However, I think I'm in the wrong. The crowds paused after the song, then broke into cheers. Even Cathy admitted that it was brilliant.

After the competition, Cathy and the moms were in the hallway together. Cathy congratulated the moms on the performance, but Abby didn't like that - she thought the moms had nothing to do with it. Of course, Cathy couldn't close it out clean - she insulted Abby and insinuated that she's fat.

Following that, Kelly cried about how this was the last time she could see her kids dance because of how much she wanted to be done with Abby Lee. Instead of building Kelly up, she kept the conversation in a negative place. Ugh. Fortunately, when the girls came into the room, Abby congratulated them and put things in a more positive place.

Christi told Kelly to take some time away before deciding to walk away. Melissa even didn't want Kelly and her girls to leave. And with that, the episode ended. We got no resolution on Kelly's decision...but we certainly a cliffhanger. We also got Brooke's music video, and I hate to say it, but it was an auto-tuned mess. Which makes me a little sad considering how cool Brooke is. But you win some, you lose some, right?
at September 11, 2012

OK, I understand that this show is largely scripted and the drama isn't real...but script or not, I can't imagine ANY teacher telling a mother to bring her kid to the doctor and find out 'what is wrong with her', implying she is stupid...and the kid is sitting right there!

Come on, Abby, script or not, have you no integrity? Can't you just refuse to say something this outrageous?