This post is dedicated to some random stuff we're loving this week. I know there's already a post about great stuff from the week, but I guess there's always room for more!

It looks like a new trend is hitting the baby name circuit, and that's naming babies after cities in New Jersey. Kidding, kidding! Well, sort of, anyway. Just weeks after Kristin Cavallari and Jay Cutler welcomed baby Camden Jack, Vanessa Minnillo and Nick Lachey welcomed a child named Camden John. Kristin came under fire for a tweet saying how Camden's becoming a popular name these days, but she clarified by saying she loved the name and that was a compliment to Vanessa and Nick, not an insult. I think she's lying a bit on that cover up, but whatever - it's best to keep the peace in celebrity land. 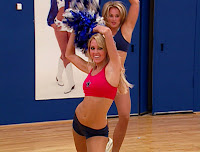 Speaking of names, Dallas Cowboys Cheerleaders: Making the Team reinforces why you need to give your kid a good middle name. I'll admit - this show is one of my guilty pleasures. It's lighthearted and poppy at times, yet you really feel for the girls when they find out that they won't be making it to  the next round of auditions. Plus, the competition's cutthroat - girls that are currently on the squad are at serious risk of losing their positions to newcomers. Aside from that, who can resist watching a show where super thin girls are called fat because they have a tiny bit of extra skin around their stomachs? It's just obscene and shows us exactly what's wrong with our superficial society.

As far as the naming thing goes, the girls are called by their first and middle names on the show. So I feel like Kelsey Lauren (a real name from the show) automatically has an advantage over someone named Lynn Ann or something.

Jessica Simpson came under fire for dressing her daughter in a yellow itty-bitty bikini. I took a look at the picture and while I'm not sure I think the bathing suit is cute in any way, I don't think Jessica deserves the controversy she's gotten for dressing her baby in a bikini. Babies hang out in just diapers all the time - adding a yellow top hardly makes things scandalous. I guess people are saying that Jessica Simpson's sexualizing her daughter Maxwell Drew, but let's get real here - the kid's less than a year old. Get your minds out of the gutters, people!

To close this out, here are some random tidbits from the week: Amanda Bynes was ordered not to drive after her multiple DUIs and hit-and-run car accidents. Sally Struthers joined Team Bynes by getting a DUI of her own. You know I love a sale, so you can save 10% on all your Zumba clothes using code SIREN at checkout. To offset the fact that it will have to charge sales tax, Amazon is setting up warehouses around the country so it can offer same day shipping to some areas. Kris Humphries may be secretly dating Myla Sininaj, despite telling friends and family that he wasn't...and they are not happy about it.