Sister Wives both made me smile and become frustrated me this week. Some of it was sweet, but some of it made me wonder what Kody, Meri, Christine, Janelle and Robyn Brown are thinking. 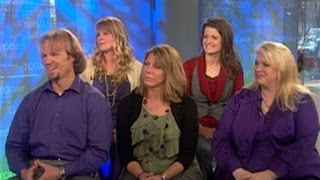 First and foremost, props must be given to Kody Brown and the two wives who looked into working in real estate to make some money for the family. Since no one appears to be working right now, I would assume that the money that the Sister Wives have comes from appearing on their TLC reality show. That money won't last forever, I'm sure...even Kate Gosselin had her show cancelled...so the family should find another source of income. I think it might be better if one member of the Brown family finds a job that provides more steady income than real estate can, but they're off to a good start anyway. And, if people want the Browns as their real estate agents because of their fame, they have the potential to bring in a ton of cash.

I think it's irresponsible that Kody and Robyn Brown decided to try to get pregnant. I understand that they wanted a child of their own, but the family has no income. Wouldn't it be a better idea to become financially stable before having another kid? I'm happy that they were able to conceive the child that they wanted, but kids are expensive!

I thought it was funny when Kody said that he worries that his kids' friends will have more of an influence on him than he will. Why is that funny? Because they will. It's natural that a child's peers have an impact on the child's life. If our parents were our only influences, we wouldn't learn about other people, perspectives and cultures. Even if you believe your culture is right, it's still important to learn from those around you. Plus, peers can influence others in a good way - it's not all negative! Kody's concern seems to come from a place of fear that the children will abandon their religion. For someone who claims that his children can choose their own religion (as adults, though, not before they turn 18), Kody sure does try to keep his kids in his faith.

If I remember correctly, Mariah Brown was the only child of the teenage set to want to have sister wives. I wonder if that stems from the fact that she never had a full sibling and wants to build a large family of her own because of it. Or, she may fear that she will only have one child like her mom did, and wants to ensure that she'll have lots of kids, even if they aren't biologically hers.

It was nice when the women grouped together to buy husband Kody a Claddagh ring. Even though there is clearly jealousy among the women at times, they truly do love Kody and have bonded together as a family.
at October 03, 2011