I went to the Real Housewives Live Tour in Atlantic City, featuring Caroline Manzo, Cynthia Bailey (a last minute fill in for Kyle Richards), LuAnn de Lesseps and Vicki Gunvalson. Here are some reviews, recaps and takeaways from the show.

Today, I attended the 3 PM showing of The Real Housewives Live Tour in Atlantic City, NJ. While I expected all of the seats to be filled, this was not the case. In fact, the ushers moved many people up closer to the stage to fill the empty seats.

Overall, the show was mediocre at best. My biggest gripe was that the women hardly interacted with each other. The host, John Jude (not sure of spelling or if I got that completely right) spoke to the women and they responded back, but they hardly spoke to each other.

There were some technical difficulties, like the videos not working, causing awkward silences and delays.

That being said, the show had some great moments, like when LuAnn de Lesseps did a silent cheer during the clip of her telling off Ramona Singer, and Caroline Manzo being her usual, tough self.

I didn't do the VIP ticket option, and from what I'm told, that was a good decision. The person I spoke to said that it wasn't worth the money. She got cocktails and appetizers, but she only got to take a group picture with a bunch of other VIP guests and the Housewives. There was no one-on-one discussion. Plus, the Housewives reportedly came out into the casino to talk to people at 1:45, before the VIP event began. The Housewives were also accessible and talked to people from the stage after the show.

I'm not sure if this will be the same in other locations, but so many people were very dressed up for The Real Housewives Live Tour. I'm talking about tall heels, fancy dresses, nice purses, etc. It was pretty hardcore. (I wore jeans, for the record.)

The RH Tour show was fun because we picked up some good information, like the fact that Caroline Manzo may soon be on Sirius satellite radio. And the fact that Vicki Gunvalson had intended to keep her divorce from Donn private, but producers put her in a situation where she had to talk about it. From this, we learned that contrary to popular belief, Donn was not blindsided by his and Vicki's divorce. He was blindsided by being served papers at work, but not by the divorce itself. Additionally, Vicki now has a boyfriend named Brook who is five years younger than her and fills up her love tank.

The women were asked if they could only give one, what one piece of advice they would give their kids. Caroline said have integrity and treat others how you would want to be treated. Vicki said don't forget where you came from. LuAnn said respect your parents. Cynthia said live life to the fullest and be happy. 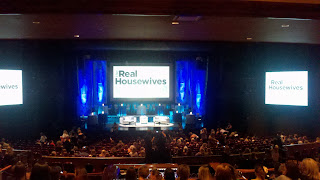 The women were also asked to name their cringeworthy moments from the show. Vicki said visiting son Michael at college, Caroline said being seen with no makeup, LuAnn said not saying things that she should have and Cynthia said the friend contract

When the host inquired about the worst fights on their shows, Caroline said the table flip, LuAnn said Alex defending Ramona for no reason in Morocco, Cynthia said when Phaedra Parks accused her of calling her baby an alien (although Kim Zolciak actually said it) and Vicki said when Jeana Keogh and Tamra Barney fought at her party during season six.

Caroline was asked the most audience questions by far.

When asked about getting involved in Teresa Guidice's family drama, Caroline said her family also has drama since she is one of eleven kids, but they make up. She said everyone has to find their place in the family.

Caroline likes to shop at the Short Hills Mall and at boutique stores. She said the most embarrassing moment on the show was when she cried at the season one finale because the situation was so personal and she didn't want to give Danielle the satisfaction of seeing her cry.

Caroline's mom stood up to ask her a question, and the question was about where Caroline gets her wisdom. In response, Caroline said nice things about her mom and what she's gained from her.

Now that she's on the show, Caroline has to struggle to maintain her identity as a wife and mother and ensure that she makes time for her husband Albert. Albert used to be the busy one, but Caroline's taken over that role.

The host brought up the conversation from Watch What Happens Live where Caroline said she'd rather deal with Danielle Staub than Kim Granatell. Caroline elaborated, saying that somewhere deep in Danielle there's a heart, whereas Kim is just "batsh*t crazy". She also said she thought it was insane that she saw Kim with Michael Lohan at Starbucks. (Reportedly, Kim Granatell and Michael Lohan are dating.)

Caroline insists the The Real Housewives of New Jersey and the other Housewives shows are not staged. However, she did say that she's been put in situations, but the reactions are real.

LuAnn said that the Real Housewives of New York cast is like a family and she will miss those who are leaving the show (Jill Zarin, Kelly Bensimon, Cindy Barshop and Alex McCord). She has not yet met the new women, but filming starts soon and she is looking forward to filming the new season.

LuAnn let us know that she her divorce was tough, but it was for the best and she and her ex-husband are friends. In fact, she, Jacques (her boyfriend) and her ex all had lunch together in France. Her ex would also be staying with her in November.

LuAnn has a nursing degree.

LuAnn was cast to be on Law and Order two days before her appearance on the show. She found doing a semi-nude scene nerve wracking. She is open to doing more acting but isn't actively seeking opportunities.

Vicki has been a Housewife for the longest time. She was on the original season of The Real Housewives of Orange County and has continued from there. She never realized that the franchise would get so popular or spawn so many spinoffs.

Vicki is moving on with her life. Her house is up for sale, her business is growing and she's finalizing her divorce. She's also enjoying time with boyfriend Brook.

Vicki has a book called More Than a Housewife.

While she was tactful about it, it was obvious that there is tension between Vicki and Alexis Bellino. She said Alexis is different around her husband and when she's not around him. She also noted that Alexis doesn't know herself and is being subservient to her husband. Vicki respects that Alexis loves her husband, but thinks something doesn't seem right about them.

Vicki Gunvalson seems to agree with Caroline Manzo's statement about being put in situations for the show but the reactions being real. For example, the show placed Vicki in a situation where the producers knew she'd break down and discuss her divorce even though she hadn't planned to do so.

Vicki's advice for any guys taking her daughter on a date is "Leave your penis at the door, then take my daughter!"

Vicki and Donn had problems that we didn't see. Vicki realized that she had been staying married for everyone else, but not herself. She and Donn were fighting way too much, he didn't want to talk through their problems and Donn didn't chase after Vicki when she said she wanted to leave him.

Cynthia said she and hubby and Peter are doing great and beat the odds. She said the issues that her friends and family had with Peter have been resolved.

Cynthia did not go on a honeymoon after her wedding. She and Peter took daughter Noelle to Jamaica to go to a wedding the next weekend, so they took a vacation but it wasn't a honeymoon.

The Real Housewives of Atlanta star is opening a modeling school. This will be chronicled in the next season of the show.

Her husband is opening a bar called Bar One.

If she could, Cynthia would give all of the women on RHOA makeovers.

It was difficult for Cynthia and Peter to watch RHOA because he didn't realize that Cynthia's friends and family didn't like him. (Things are better between now, but Peter and Cynthia's sister are still trying to work out some kinks in their relationship.)

Cynthia has appeared in music videos and on The Cosby Show as Shaniqua Watkins. She says there are embarrassing photos or videos out there of her in the past, but they haven't yet been found.