Obama Doesn't Want His Daughters Keeping Up With the Kardashians

President Obama has stated that he doesn't want his kids watching Kardashian-based reality shows, including Keeping Up With the Kardashians. The Kardashians are surprised by this, for some reason.

While some people are focusing on the Occupy Wall Street movement and the volatile stock market, others are taking the time to bug out over Michelle Obama's comment that her husband Barack Obama doesn't like daughters Sasha and Malia watching Keeping Up With the Kardashians.

As usual, the Kardashians saw this as a potential press opportunity and opened up to the press about their shock and horror. Khloe Kardashian Odom was quick to note that the president had previously told her that Keeping Up With the Kardashians was a good show.

But here's the thing, Khloe - Barack Obama is an adult. Sasha and Malia are kids. And is Keeping Up With the Kardashian a kids show? No. But still, Michelle and the kids watch it. Michelle simply said that Barack isn't always happy about it.

Rob Kardashian took a mature spin on this and contended that clearly the family is watching the show, and the show doesn't have negativity. He says that each show ends with a positive message.

The thing is, I don't think Barack is arguing that Keeping Up With the Kardashians, Kim, Khloe, Kourtney or whatever Kardashian is taking over Miami or New York at the time or any other Kardashian shows are bad. I think the real problem he has with the Kardashians is the negative press surrounding them. As much as their show portrays a cookie cutter clean image of the Kardashian clan, in real life, Kourtney had a child out of wedlock, Kim had a sex tape, Kris will do anything to get her kids in the spotlight and Kendall does modeling that may not be appropriate for a girl her age. I'm not saying the Kardashians/Jenners don't have a right to do any of this, but perhaps the nation's president doesn't want his kids to look to the Kardashians as role models. Heaven forbid!

In other not shocking Kardashian news, reports are stating that Kim Kardashian and Kris Humphries are having marital problems already. I'm going to give a big "duh" at this one. The pair only dated for six months before getting married, Kris' family reportedly hated the wedding and the Kardashian family reportedly hates Kris. Plus, Kim comes off as a major narcissist, and it's been stated that when Kris H. tries to give creative input into the Kardashian reality show circuit, he gets immediately shut down. So...where exactly was the positive in this in the first place? 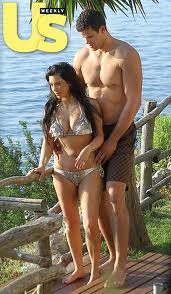 I still stand by the fact that momager Kris Jenner pushed Kim into getting married and all of the "OMG we hate Kris Humphries" antics by the Kardashian family are just a scam for TV ratings. I mean, what about that marriage doesn't scream 'fake'? The over-the-top, made for TV wedding did. The anti-Kris sentiments by the Kardashians does. The fact that Kim is thirty and wasn't married or pregnant must have set off some warning bells in mom Kris' mind. I genuinely don't think the wedding was ever meant to last. I mean, have you seen the super fake honeymoon pictures?

Reports have also stated that the Kardashians are worried that Kris Humphries is using Kim for fame. Well...yeah. He probably is. But that's probably in return for the fact that he was probably personally selected by Kris Jenner as a potential mate for Kim. I mean, his name is Kris (this looks intentional), he's a little famous (two), he comes off as dumb so the Kardashians thought they could use him in their master scheme (three) and he's tall and has a somewhat similar look to Kim, so if they have a kid, it would simply look like a taller version of Kim (four). I could be wrong, though...I'm just not convinced that I am.
at October 22, 2011