Toddlers and Tiaras 9/7/11: Queen of Hearts Pageants in Statesboro, Georgia

The director of the Queen of Hearts Pageant, Tanisha Dorsey, says her pageant is full glitz because that's fun for kids. And, she says there's no crazy pageant moms in her pageants. I think I may disagree with both sentiments.

Mom Brook and daughter Brystol have been participating in pageants since Brystol was eight weeks old. Dad Mike is also supportive, as long as Brystol comes home a winner. Mom works four days a week to support the pageant habit, and she'd be happy to take out a second mortgage to ensure that Brystol wins pageants.

Brystol has had a pageant coach, Tara Burton, since she was two weeks old. Brook told Tara she's take care of her if she took care of Brystol's pageant career full time, so Tara quit her job to be a full time pageant coach for 18-month old Brystol.

The Queen of Hearts Pageant is Brystol's first full glitz pageant, and Tara used airbrushed makeup to give her a pageant glow. After that, she had her hair done as half-sister Madison looked on in disbelief. Brook is Madison's step-mom, and Madison said that Brook is "kind of crazy". I can understand this - the money that could be in Madison's college fund is paying for a baby's pageant career!

Chloe, daughter of Sarah and Brandon, has the support of both of her parents for her pageant participation. Chloe's a daddy's girl, and doesn't even allow her mom to be around during pageant practice.

Chloe, 2, has moved from natural to glitz pageants. Getting Chloe ready was not fun for mom because she seemed to want nothing to do with her. And, when she didn't perk up even when her dad arrived, her parents gave her an energy drink mixed with apple juice.

Victoria is the 3 year old daughter of Tammy. She was described by her brother as spoiled. She did her first pageant at the age of two. Victoria was put into pageants so Tammy could get mommy-daughter time with her at first, but now the intent is to win. Dad Nick helps make Victoria's dresses, so she, like the others, has a supportive pageant dad.

Victoria's mom took a risk by giving Victoria black shoes, rather than the traditional white shoes and socks combo. That wasn't a great idea. However, she did say that she wanted to keep her daughter clothed appropriately and not show off her body like lots of the moms did, which I very much respect.

The Queen of Hearts pageant had three categories: beauty, outfit of choice and celebrity wear.

Brystol had a meltdown when getting ready for the beauty category, but let's face it - the girl's 18 months old! It makes sense! She finally calmed down, but then she hit her head on a door and freaked out again. She screamed and cried pretty much the entire time onstage. Mom said she thinks the display on stage, as well as Brystal's new facial bruise, would hurt their chances of winning Grand Supreme. I'd give that a big duh...I think they're pretty much screwed at this point.

Chloe did okay, but didn't have much by way of facial expression. Victoria was third, and the scene cut to a judge saying that her black shoes would detract from her overall score. The shoes matched her outfit well (and her outfit was cool!) but her mom should have at least gone with the traditional pageant shoes in black if she wanted to be original.

Outfit of choice was next. Brystol did well in this category, thanks to some cheering up and candy. Brystol looked like she was genuinely having fun. Chloe missed her cue because she wasn't ready to go onstage. She didn't want to put her headdress on, which caused a delay. She was able to go on late, and the girl looked a bit confused. A judge even said she needed to show more personality. Victoria was next, and she looked awesome in her Queen of Hearts outfit.

Brystol had another meltdown during celebrity wear. It stemmed from someone in a wolf mask from a big bad wolf costume. Chloe was dressed as Jeff Gordon. She drove her toy car like a pro, but her CD was cut off early, which messed up her routine.
Victoria went third, and while her dress was cool, her performance was less than stellar.

In this category, there was a girl named Paisley who was dressed as Julia Roberts in Pretty Woman. You know, a prostitute. This pretty much emphasizes why pageants girls are called prostitots. 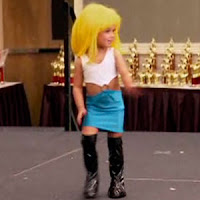 After the show aired yesterday, mom Wendy Dickey was shocked that Paisley's costume caused controversy and defended her actions. She said Paisley's costume was much more conservative than Julia Roberts' original in Pretty Woman, and Paisley's three, so this was hardly sexualized. She also claims the show showed only half of the routine - Paisley later changes into Julia Roberts in a later scene where she isn't dressed as a prostitute. She claims the judges and most of the moms loved the costume and thought it was funny and not at all inappropriate.

While I think the costume is somewhat in bad taste, I don't think it's as tragic as the Parents' Television Council is saying. However, the PTC will bite whenever anything isn't perfectly squeaky and clean. Their group and other conservative groups practically had a meltdown over Chaz Bono appearing on Dancing With The Stars.

And wait...it gets better! Mom wants to auction off the prostitute dress for the charity that Paisley supports (you know, because a three year old understands this stuff) - an anti-abortion organization!!! This is getting so wrong on so many levels!

12 - 23 months
Fifth runner up: Brystol (Her family missed crowning so she had to come up separately after everyone else. Mom was so unhappy with the results that she told Brystol that she doesn't want the trophy and said that Brystol could chew on it.)
Queen: Taylor

At this point, Chloe's mom thought she pulled for a higher title.

3 year olds
Tie for fifth runner up: Darryanna and Zoe
Fourth runner up: Victoria (Mom said fourth out of twelve girls wasn't bad, which was awesome! She was supportive no matter what. Go mom!)
Queen: Maddi

Chloe's mom went to talk to the judges to ask why Chloe didn't place. The answers were that they didn't like her dark dress and she didn't have personality during beauty. Instead of taking criticism, mom said that she now realizes why local pageants aren't for her and she only does national pageants.

Brystol's mom also had a hissy fit about Brystol only getting fifth place. I hate to say it, but her kid did so badly...what did she expect? Dad also admitted that he thinks pageants are too much for little kids. He has a point. Coach Tara stayed positive and said that there will be other opportunities, and mom did seem to agree - she said she'd be looking for a pageant for the next weekend.
at September 08, 2011