This week on The Glee Project season finale, Samuel, Lindsay, Damian and Alex battled for their prize: a coveted spot on hit FOX television show Glee.

This week's topic was Glee-ality, and the performance song was Don't Stop Believin'

by Journey. Immediately, we saw Samuel and Lindsay's excited attitudes, whereas Alex seemed more subdued and Damian blended into the background.

Samuel made a good point about what the producers were looking for: "Not who's good, who's Glee." This makes sense, after all, because they make a big deal about this not being a singing competition.

Ryan Murphy was the guest of the week. When he came in, it was clarified, once again, that the winner would get a seven episode guest spot on Glee. That being said, I think the winner will end up with more than seven weeks if they work out, but the show just wants to protect itself if the person doesn't work out.

As soon as Damian started singing, Ryan Murphy stopped the song. He asked if the group had done choreography, which they hadn't been doing. Then, he said the contestants needed some help. He opened a door, and the eliminated contestants, even quitter Cameron, were back. They all sang backup for Don't Stop Believin', and the spirit was instantly much higher.

Damian did well, Lindsay was ecstatic and rocked it, Samuel was understated but very much himself, and Alex was over the top, but really good with it. At this point, I so wanted Lindsay to win. She wants it so bad and makes it known. And, she's come a long way towards finding herself.

There was no homework winner that day, because the rest of the episode would be dedicated to finding the winner. All 12 of the contestants would be taken to the top of a skyscraper to perform Pink's Raise Your Glass

. After that, the four contestants would do last chance performances for which they'd select their own songs.

The group found out that they'd be performing of a helipad. Alex noted that he'd be scared that one of the contenders would push him off. He was half kidding, but I'm pretty sure there was a hint of real concern behind it.

All of the contestants danced together, and Samuel noted that he thought people were wondering how the top four turned out the way it did. I can understand this - I would have preferred to see Marissa and Hannah over Damian and Alex. I would definitely keep Samuel and Lindsay, though.

It was noted that Samuel is too intense. It was also stated that Damian is accessible and the underdog, whereas Lindsay 'can't be found' and has to convince Ryan that he's believable. Alex tends to be unprofessional.

Samuel looked awesome in the video. Lindsay was intense and stood out like no one else on the screen. Alex came off a bit too character-ish and not real enough. Damian was good, but didn't stand out. The big group dance was awesome. It was great to see everyone working together. When Samuel did the "too school for cool" it was fantastic. Lindsay's line was great too, but I found Damian and Alex's a bit weaker. Marissa also had strong stage presence, which further cemented my theory that she shouldn't have been cut.

Ian Brennan, co-creator of Glee, would be joining Glee castmates and former competitors in the audience for the final performances.

from Thoroughly Modern Millie because it's vulnerable, which is what Ryan wants to see from her. Lindsay was told that she can have a great voice but without heart, she won't connect to people. Lindsay came in with great style and attitude. Her song showed great personality and versatility. She finished her song very strongly, and you could hear her passion, strength and desire coming right through her voice and overall performance. Again, Team Lindsay! Ian Brennan actually said this was the best vocal performance that he's heard from Lindsay. Lindsay is incredibly talented and I think even her critics would agree on that.

Damian dedicated his song to Hannah and Cameron. He chose
Beyond the Sea

by Bobby Darin because he wants to see Damian as a lead. Damian was told that he's not the best singer, actor or dancer (ouch), but the competition is about finding someone who Ryan and the producers want to write for. Once again, Damian wasn't nearly as good as Lindsay, but he was funny and played into his strengths. He also made the song work for his voice - he kind of talk-sang through it. It worked great! While I still don't think Damian should claim the role on Glee, he did a great job showcasing his talents tonight.

by Dolly Parton. He said he doesn't want it to be perfect, just organic. He wants to be in his own little world. In response, he was told that he should let people into his world. In my opinion, Samuel was a bit disconnected during his performance. However, that may just be my interpretation because I don't love the song. I think even the audience members looked a bit disconnected, though. I think Samuel put himself at a disadvantage because his song wasn't as much fun or intense as Damian's or Lindsay's. That being said, the producers enjoyed it.

Alex sang I Am Changing

from Dreamgirls. He said he is doing it because he wants to branch into female type roles. Alex decided to dress as a female and admitted that he was taking a risk by coming out in drag, rather than as himself. While I admit Alex's risk, I also think he's doing himself a disservice because I don't think he'll be cast in a female role. He could be cast as a male who dresses in drag, but I don't think he'd be chosen for an actual female character. Alex's singing was intense. While I'm not normally an Alex fan because of his over-the-top attitude, he really made it work for him in this piece. You could really see how much he wants to win The Glee Project, and I have to respect that. The response to his performance was that it was amazing.

Ashley Fink liked them all, and Dot-Marie Jones complimented Lindsay, Samuel and Alex. Darren Criss said Lindsay would be great foil for Rachel Berry and Harry Shum Jr. said Samuel could give Puck a run for his money. Max Adler said that Alex could represent an underrepresented group on TV.

Erik White said Lindsay was the best actor. It was noted that Damian could be a foreign exchange student that morphs into much more. Samuel could survive on television, not just Glee. Lindsay was noted as being very powerful and she finally found herself at the end. Alex was said to be always good, but great in drag.

Alex was told that he's moving and supports the concept of being himself against all odds. Alex was told first that he wasn't the winner.

Ryan said he'd been hard on Lindsay, but tonight she brought it and came the farthest in the competition. She was told second that she was not the winner.

It came down to Damian and Samuel. 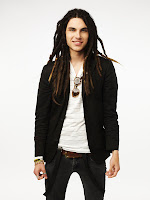 After that, Lindsay and Alex got surprises as well: they'd each get two episode arcs on Glee.

They all freaked out in happiness. With that, season one of The Glee Project concluded.

There are going to be auditions for the next season of The Glee Project. Go to Oxygen.com for info. I tried to visit the site, but apparently so did everyone else - I got a 'server too busy' message. This is a good move on Oxygen's part - the show attracted a ton of viewers, which is great for Oxygen, which doesn't exactly find every single one of their shows to be a huge hit.

This ending seemed to have been predetermined before the final episode was even taped. Why do I say that? Because no one was kicked off last week, so the producers clearly knew that everyone would earn at least some kind of role on Glee. Were the two full winners and two partial winners specifically selected ahead of time? I'm not sure. But the planned outcome with all four finding a place on Glee definitely was.

While I'm happy that we'll get to see four Glee Project contestants on Glee, I'm a bit bummed by the cop-out of an ending. All of the waiting to find out that all four of them are winners? I feel like I should have skipped the first fifty minutes of the episode and just flipped to the end to hear the "Yea, everybody wins!" message.

Cameron was chosen as the Bing Fan Favorite. This is ridiculous because he quit. Not cool, voters!
at August 21, 2011

Email ThisBlogThis!Share to TwitterShare to FacebookShare to Pinterest
Labels: the glee project