This week, MTV showed us Teen Mom: Check Up With Dr. Drew, which is a reunion show for the cast.

Catelynn and Tyler have come a long way. Carly has helped them to realize their goals and ambitions.

Catelynn's mom April made an appearance on the show. April claims to be over the fact that Catelynn and Tyler gave up Carly for adoption. However, on the show, she was truly an awful mother, and was obviously upset about the adoption. April claims to regret all of the negative things she said to Catelynn. While the apology is noble, but it doesn't undo the pain she caused for Catelynn. That being said, she also needed to stop Catelynn from having sex so young! Catelynn was having sex even before dating Tyler!

Farrah's still renting the rental house that her mom owns. She got really upset when she had to talk about the loss of her boyfriend, Derek. The poor girl is grieving so much but can't fully heal from the situation. We wish you the best, Farrah!

Farrah seemed genuinely happy to be in touch with Derek's sister, Kassy. The relationship is amazing for both Farrah and Sophia.

Farrah's mom Deborah made an appearance on the show. Deborah explained that she now better understands the grieving process that Farrah is experiencing, and opening her mind to that has helped her and Farrah rebuild their relationship.

We learned that Farrah's mom didn't want Derek to know about the baby. It's an interesting story with Farrah and Derek - their relationship was clearly tumultuous, and Farrah probably is idealizing it now, but she truly is remorseful to not have Derek in her life. There is no changing the past, but it would be interesting to know if Farrah, Derek and Sophia would have a relationship now if Derek was alive.

Amber admitted that she never felt like a teenager because even before having Leah, she had to parent herself. This is interesting, because it explains why she lashed out when she couldn't count on Gary. I'm not saying she was right in any capacity, but her actions do make more sense knowing what she went through.

Amber still doesn't have her GED. She doesn't care anymore. She seems like she's truly been beat down by the world. I feel bad for her - she seems so depressed that she can't handle the world.

It seems that after watching this season of Teen Mom, Amber learned to appreciate Gary more. He truly deserves it - he's a great guy. Amber admitted that she loves and wants to be with Gary, although she hasn't particularly been able to show it. 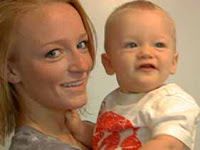 Maci looked great, as always. She defended her choice to move to Nashville and away from Ryan and his family. She did handle the situation properly; Ryan was actually able to see Bentley more than before Maci moved.

Kyle is back in Maci's life. Maci says she can see herself marrying him. It turns out that Kyle and Maci were sort of dating when Maci met Ryan, and she subsequently became pregnant. The drama comes out!

Kyle and Maci seem to have a communication issue. They both really care about each other but can't express it to each other. Yet, they can tell Dr. Drew about their feelings. It's a bit strange.

Like Kyle, Ryan, Bentley's dad, made an appearance on the show. Maci admits that Ryan has become a better dad, but she still harbors negative feelings towards Ryan as a dad since he ran away from the relationship when Bentley was born. Sadly, Ryan blamed the way he looked on television editing, but Maci was able to combat his words and show that Ryan actually wasn't there for Bentley.