This week on "I Love Money," we saw Chi Chi's jealous side. 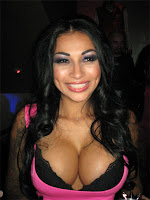 When Chi Chi found out that Brittanya had been (and still was) hooking up with 20 Pack, he got jealous and wanted revenge. As such, he ended up using his power to get 20 Pack kicked off of "I Love Money."

I really do feel bad for him - he probably gets rejected a lot, especially with a more attractive best friend like Sinister - but still. Did he really think Brittanya would pick him over 20 Pack? 20 Pack is way more attractive and secure in himself than Chi Chi. Once again, I feel bad for Chi Chi as he was in an awful situation, but I'm surprised that Brittanya even hooked up with him in the first place.

By the end of the show, Brittanya had won in her own way - she made peace with Chi Chi as friends (because she clearly doesn't want more than that), and helped to get 20 Pack off of the show. She'll still probably have lots of drama as the season continues, but at least this part is over.

Aside from this piece of drama, the main focus of the show was a kissing challenge, where team members had to transfer food from their mouths to the mouth of a 'taster' on their team. I seriously almost puked watching this, and have that feeling again now that I'm retyping it. As someone who doesn't love germs, this was absolutely appalling.

Even with the grossness, I'll continue to watch "I Love Money," as I love the show and am a huge Brittanya fan (despite the fact that I think as a parent, she should probably be a bit more mature than she has been).

Email ThisBlogThis!Share to TwitterShare to FacebookShare to Pinterest
Labels: i love money